The Spoiler is a Super Heroes minifigure that appears in LEGO Batman: The Video Game and she reappears as a DLC character in LEGO Batman 3: Beyond Gotham.

Spoiler wears a purple suit and black gloves, and a hood and mask that shrouds her face.

In the comics, Stephanie Brown is the daughter of the villain Cluemaster. She is also Robin's girlfriend. She then temporarily became the fourth Robin, but later returned to the Spoiler mantle. Stephanie was thought to be killed by Black Mask, but it was later revealed that she had faked her death, and took over Batgirl mantle for a while but then was killed.

She is only playable on the portable version of LEGO Batman: The Videogame, but is available to build on character creator when the player collects all villain minikits. 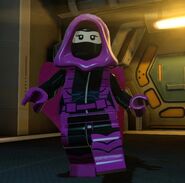 Spoiler in Lego Batman 3: Beyond Gotham