The Swamp Creature comes from the Cold Sleep Swamp, in the marshlands of the Monster Realms. It is based off the Gill-man in the movies franchises and TV appearances from: Creature from the Black Lagoon, its two sequels, the The Monster Squad (which the theme Monster Fighters is heavily based off) and the gill-man appearance in The Munsters appearing in one episode as the Munster family's Uncle Gilbert, of which his name is a pun on gills that the creature has.

"Is this supposed to make us feel better?"
―The Swamp Creature

In The LEGO Movie, the Swamp Creature is among the Master Builders to meet in Cloud Cuckoo Land. He is subdued and captured by the Super Secret Police force led by Bad Cop and put in prison to the Think Tank. Later on, he is freed and help the other Master Builders to stop Lord Business and his Micro Managers.

In The LEGO Batman Movie, a different Swamp Creature was among the inmates of the Phantom Zone.

The Swamp Creature makes a Cameo in Apocalypseburg, helping Emmet, Lucy, and Unikitty from Sweet Mayhem. 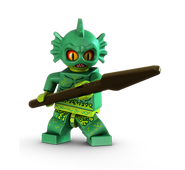 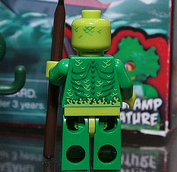 The Swamp Creature as seen in The LEGO Movie.

In LEGO Worlds
Add a photo to this gallery