The Temple on Haunted Hill

The Temple on Haunted Hill is the fourth episode in the fifth season, and the fourty-eighth episode overall of LEGO Ninjago: Masters of Spinjitzu.

The Ninja hear of another way to learn Airjitzu - from the ghost of Sensei Yang at his haunted temple - but there's a warning; if you are trapped in it by sunrise, you will become a ghost, too. Meanwhile, doubting she's a Water Ninja, Nya quits her training to take Ronin to her Samurai X cave...but has a run in with Morro.

At Steep Wisdom, Sensei Wu continues to train Nya to be the Water Ninja but she messes with him and declares she's a Samurai. Misako then approaches and reveals that Ronin is in the shop. He explains that since the Ninja failed to get the scroll of Airjitzu from Morro, Kai already gave him their shares in the tea shop, so he told the Ninja of another way to learn Airjitzu; going to Sensei Yang's Haunted Temple. The Ninja arrive, and hear from the tour guide that anyone left in the temple by dawn will become a ghost. When the tour bus leaves, the Ninja emerge from their hiding places and enter the temple, unknown of what lies ahead of them. Meanwhile, Morro examines the second clue of the staff, Bansha says they need more than Airjitzu, Soul Archer and Ghoultar implies they need to possess more vessels, and Morro suggest they need more vehicles.

In the temple, the Ninja are searching for the scroll while Cole fears about transforming into a ghost if they don't leave the temple by morning. Jay reads a book about Sensei Yang and his strict methods of teaching. Later, the Ninja listen to a strange sound coming from the other side of the temple. Cole walks there and the other Ninja follow him, and found Sensei Yang's Dojo. Cole asks who knocked the door. Sensei Yang then says to the Ninja, "As iron sharpens iron, sensei sharpens students." In that moment, several swords try to attack the Ninja while they escape. Zane suggest they head for the dumbwaiter but when they were inside, Sensei Yang appeared in front of the Ninja. When the group open the door to escape, they discover they were trapped in a ethereal inter-dimensional realm.

In the tea farm, Ronin implies they need more money and not friends. Nya said they need to go to the Samurai X Cave, Ronin suggest they go to in the Bounty. In that moment, Nya offers a bag of money to Ronin if he can take her to the cave.

Meanwhile, the Ninja try to think of a way to escape the temple. Jay sees a strange picture of water inside. When he knocked it, the room begin to fill of water. Yang returns and implies that "As Iron Sharpens Iron, Sensei Sharpens Student." Kai, having a fear of water, tries to open the door, in which he did. Later, the Ninja understood that the Sensei Yang is trying to teaching them about their fear and to face them together.

Meanwhile, Nya and Ronin travel over the desert with R.E.X.. Ronin tell Nya about he made a mad bet with Soul Archer and try to pay or his soul will go to the Cursed Realm. When they were near the cave, they discover they are not alone; Morro and his group try to get one of Nya's Mech. In that moment, Nya activated her Samurai Mech to fight the ghost, in which she failed. Ronin save Nya from one of Soul Archer's arrows using an Aeroblade. Morro tried to summon more allies but Nya threw a bomb at the Armor, forcing Morro to get rid of it before it finally exploded. Ghoultar finally possessed the Samurai Mech, in which they will use to climb the Wailing Alps. Morro sent his forces to destroy Nya and Ronin. They try to escape but Morro and his group finally surrounded them. It miraculously began to rain, forcing the ghosts to hide. Morro implies that they can leave the two. Ronin implies that the rain was made from Nya, and implies she is the Water Ninja.

Meanwhile, in the temple, the Ninja are ready to confront the tests of Sensei Yang like a team by tying themselves together. Kai asks Zane and Jay about their fear. Suddenly, Zane falls into panic to see Morro. Later, Kai understood that this is another test of Sensei Yang and they pursuit the false Morro. When he hides in the attic, Jay tells the group about his fears over attics. The Ninja climb the stairs and found the impostor. When they faced him, Sensei Yang appears to congratulate the Ninja for passing his tests and gives them the scroll of Airjitzu.

In that moment, the transformation of ghost begin; Sensei Yang warning the Ninja if they fail to leave the temple at the last chime, they will stay ghosts forever, forcing them to escape. When they're close to the door, Cole dropped the scroll and untied himself to retrieve it. When the Ninja are outside of the temple, they start to question where Cole is. When Cole finally get out of the temple, they are shocked; Kai reply to Cole saying that he didn't get out the temple in time. Cole sadly say he is now a ghost. Sensei Yang then starts to laugh inside the temple. 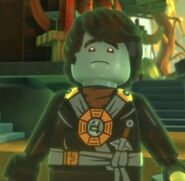