The werewolf has dark blue legs printed with rips, and a black belt. His red jacket is printed with a severely ripped red plaid shirt, and red suspenders. He has bare brown arms and hands. His uniquely molded head, also brown, depicts a snarling expression, a black nose, and eyes. He has large white glow-in-the-dark claws.

The Werewolf is a Monster, who lives in the Drachwald Forest, the haunted woods of the monster realm. He stands lurking inside the largest tree in the forest, waiting to strike. The Moonstone which grants him his power lies at the base of this tree. His arch-enemy is Major Quinton Steele. 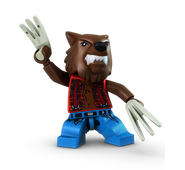 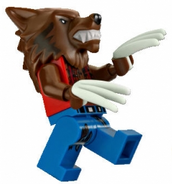 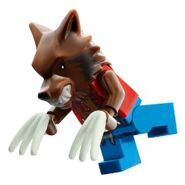 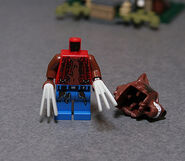 Retrieved from "https://brickipedia.fandom.com/wiki/The_Werewolf?oldid=1894683"
Community content is available under CC-BY-SA unless otherwise noted.