Brickipedia
Register
Don't have an account?
Sign In
Advertisement
in: Articles that need to be rewritten, Class 4 articles, Articles that use content from other websites,
and 4 more
English

The Yoda Chronicles is a LEGO Star Wars web and televisision series. While the original announced launch date was January 5, 2013, the release date was later changed to January 11, 2013.[1] Since then, however, it has been revealed that mini movies of the same title, but featuring voice acting and a unique plot, will also be released on starwars.LEGO.com. There was a trilogy of episodes on Cartoon Network, the first premiered on May 29th. There was a Yoda Chronicles mini-magazine in the March-April LEGO Club Magazine, and another included with the May-June edition. It was revealed in The LEGO Club Magazine that The Yoda Chronicles would continue with 3 more episodes on Disney XD, and possibly more.

2. Menace of the Sith

3. Attack of the Jedi

4. Escape from the Jedi Temple

5. Race for the Holocrons

7. Clash of the Skywalkers

The 'Chronicles' app for iPhone or iPad features characters, parts and vehicles from the Mini Brickfilms. This is available to download from the App Store. App Characters include:

Ad in the Fall 2012 LEGO Club magazine in the USA 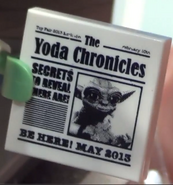 The cover of the first comic