Theron Nett is a Star Wars minifigure that was released in 2014 in 75032 X-Wing Fighter.

Theron Nett was a smuggler from Ord Mantell who later became an X-wing pilot for the Rebel Alliance. Nett fought in the Battle of Yavin, where he flew as Red Ten. He was killed when a TIE Pilot shot down his X-wing while he was attempting to cover Red Leader down the Death Star's trench. His astromech droid onboard Red Ten was R2-X2, whose head is included in 75032 X-Wing Fighter. 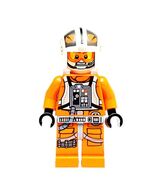 Other side of Theron's head