This article is on the Harry Potter creature; for the mold originally used for said creature, see Skeletal horse. 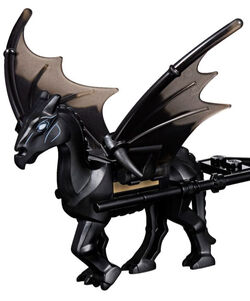 A Thestral is a breed of winged horses with a skeletal body, face with reptilian features, and wide, leathery wings that resemble a bat's. They are very rare, and are considered dangerous by the British Ministry of Magic. Thestrals are, undeservedly, known as omens of misfortune and aggression by many wizards because they are visible only to those who have witnessed death at least once or due to their somewhat grim, gaunt and ghostly appearance.