Thing has a similar mold to The Hulk with a few differences: he is orange and covered with a rocky pattern, has a rounded bald head and a molded eyebrows, and has blue trousers with the Fantastic Four's insignia in the center. A thick black line is located around the waistline.

The Thing, or Ben Grimm, is a member of the Fantastic Four (which also includes Mister Fantastic, the Invisible Woman, and the Human Torch). he has fought Galactus and his servant, the Silver Surfer, and the Four's archenemy Dr. Doom. Along with the other three, Ben was exposed to cosmic radiation. This exposure replaced his skin with a thick and rocky orange hide. Along with this, the Thing also has superhuman strength and stamina, allowing him to fight even the strongest of enemies.

The Thing is one of the heroes that Nick Fury called upon to stop Galactus, Dr. Doom, Loki and the team they assembled. 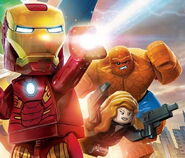 With Iron Man and Black Widow.

Thing with Mister Fantastic, Invisible Woman and Nick Fury in the Fantasticar