"Fortunately, I am mighty."
―Thor in the Avengers: Age of Ultron

Thor has messy hair, the same mould as Dastan's, except in Cool Yellow. He has a double sided, bearded head with serious and angry expressions. He wears Earth Blue armour, with three circles on each side and grey arms, unprinted earth blue legs and wears a red cape. He has back printing depicting the back of his armour. He wields a new moulded grey hammer which represents Mjølnir.

Thor reuses the same hairpiece as the previous and the face is now beardless with yellow eyebrows and dual expressions: neutral and angry. He has red cape and a black torso with metallic grey arms and flesh hands. The torso is printed with two large light grey circles and two slightly smaller beneath them connected be a thin yellow line, a yellow belt, and the suit's cut on his body. He has back printing depicting the continuation of the belt, two yellow lines forming bolts down the torso, and the suit's cut on his back. He has unprinted bright blue legs.

His appearance is identical to his Avengers movie appearance in LEGO Marvel Super Heroes except it has Light Nougat rather than grey.

In the start of the movie, Thor has the same hair he has had for all of the other movies but halfway across the movie, his hair is shaved by Stan Lee and he gets a different and cool haircut. Later in the movie, his eye is right eye is taken off by Hela.

When he gets on to the planet of Sakaar, one side of his cape is torn by a Sakaarian Ravager. So, his cape is hanging on one of his shoulders for rest of the movie.

Thor Odinson is the Asgardian god of Thunder, the former king of Asgard and New Asgard, and a founding member of the Avengers. When his irresponsible and impetuous behavior reignited a conflict between Asgard and Jotunheim, Thor was denied the right to become king, stripped of his power, and banished to Earth by Odin. While exiled on Earth, Thor learned humility, finding love with Jane Foster, and helped save his new friends from the Destroyer sent by Loki. Due to his selfless act of sacrifice, Thor redeemed himself in his father's eyes and was granted his power once more, which he then used to defeat Loki's schemes of genocide.

Upon being welcomed back to Asgard as a hero, Thor was forced to return to Earth in order to retrieve Loki after he had survived to fall through a black hole and had begun his attempt at world domination, having taken possession of the Tesseract. Thor joined the Avengers under the guidance of S.H.I.E.L.D. and stood with them to stop the schemes of his own adopted brother, eventually following the newly formed team as they battled against Loki's army of the Chitauri during the Battle of New York until Loki was eventually defeated by the Avengers, captured and returned onto Asgard to await justice for his crimes against Earth.

Thor returned to Asgard having defeated his brother's schemes, as he then helped the Asgardian Armies restore peace across all of the Nine Realms during the War of the Nine Realms. However, the peace proved to be short-lived as Thor then fought the Dark Elves during the Second Dark Elf Conflict as they had attempted to plunge the Nine Realms into eternal darkness. During these events, Thor was reunited with Jane Foster who had become host to the Aether and a target of the Dark Elves, with Thor being forced to free Loki from imprisonment for his aid. Eventually, the Aether was removed from Foster's body and Loki seemingly sacrificed Thor from Kurse, leading to the Dark Elves and Malekith's defeat. Thor renounced his claim to the throne and left Asgard for Earth so he could stay with Foster.

During his stay on Earth, Thor helped the Avengers once again, this time in their attempts to locate Loki's Scepter. This also lead to him joining the fight against HYDRA. Following HYDRA's defeat and the capture of Baron Wolfgang von Strucker, the team had to stop the newly created Ultron, a rogue invention inadvertently created by Tony Stark which had threatened to wipe out all of humanity and replace it with its own Ultron Sentries. Once Ultron had been defeated, Thor promised his Avengers allies that he would return and went back to Asgard to investigate the visions he saw when being manipulated by Scarlet Witch of the Infinity Stones. In his investigations, Thor also discovered that Loki was still alive and had usurped Odin's royal throne during Thor's absence.

To aid in both pursuing his brother and finding his father to return peace to Asgard, Thor sought help from Doctor Strange. However, Thor was just too late to save his own father from death. Shortly afterwards, Thor met Hela, the Goddess of Death and his sister. In the wake of his first encounter with Hela, Thor's hammer Mjølnir was destroyed and he was banished to Sakaar, where he was forced to compete in the Contest of Champions. After a reunion and subsequent fight with Hulk, the pair allied with the rogue Valkyrie in order to save Asgard and escape Sakaar. After battling with Hela and losing an eye to her, Thor then had Loki unleash Ragnarök and destroy Asgard, killing Hela in the process, although he escaped with the remaining Asgardians. Declaring that Asgard was all its people and not a place, Thor accepted his newfound position as king and decided to relocate the Asgardians on Earth.

As they were en route to Earth, their ship was attacked by Thanos and the Black Order, who sought the Tesseract which Loki took from Asgard's vault at the last moment. Thor witnessed Thanos take the stone and murder his brother before he was flung from the ship and left for dead. He was picked up by the Guardians of the Galaxy and had teamed up with Rocket Raccoon and Groot to travel to Nidavellir. With the help of Eitri, Thor crafted Stormbreaker and aided the nation of Wakanda and the Avengers in defeating the Outriders and confronting Thanos. However, Thor squandered his chance to kill Thanos with his new weapon and Thanos activated the completed Infinity Gauntlet and erased half the universe's population from existence before he escaped. After the Avengers were joined by Captain Marvel, the team traveled to the Garden, where Thor and the Avengers ambushed and interrogated Thanos, discovering that the Titan destroyed the Stones, ensuring that a reversal of his actions was now impossible. Enraged, Thor beheaded Thanos using Stormbreaker and left the planet.

Following Thanos' death, Thor left the Avengers and relocated to Tønsberg, Norway, where he and the surviving Asgardians resettled, renaming the town New Asgard. Five years later, Hulk and Rocket traveled to New Asgard to convince the now-overweight and depressed Thor to rejoin the team after discovering how to travel through time. Thor joined the Avengers on their Time Heist and participated in the Battle of Earth, where he fought Thanos again alongside Captain America and Iron Man, the latter sacrificing his life to eliminate Thanos and his armies. After attending Stark's funeral, Thor decided to go with the Guardians of the Galaxy, proclaiming Valkyrie to succeed him as the new ruler of the Asgardians.

After apprehending Red Skull and Arnim Zola at the HYDRA base, Captain America , Human Torch and Wolverine find Thor and he takes them to Asgard, due to Loki taking it over. They fought both him and The Destroyer. Loki escapes, but the heroes take the Tesseract from him. Wolverine then steals the it and takes it to Professor X, to see if it will help him find Magneto.

He, Iron Man and Spider-Man later went out to Doom's submarine. M.O.D.O.K. stalled the heroes, but he was defeated. The ship later sinks, but Jean Grey comes and puts a force field around them to help them breath. When the reach the sub, they interrogate Doom, but he escapes. 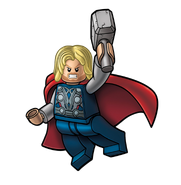 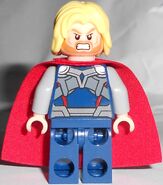 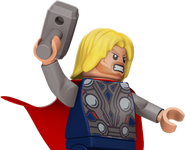 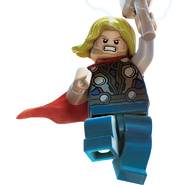 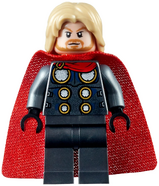