An Unexpected Journey, The Desolation of Smaug, The Battle of the Five Armies

Thorin Oakenshield is a minifigure from The Hobbit: An Unexpected Journey released in November 2012. He first appears in the first wave of the The Hobbit in 79002 Attack of the Wargs, in December 2012, 79013 Lake-town Chase in December 2013 and the 79017 The Battle of the Five Armies set in October 2014.

The minifigure has plain black short legs, and a dark blue with silver arms torso piece. The torso has printing present on the front, depicting a brown belt with various silver pieces attached, a opened up fur coat with dangling braids from his hair with some chain mail peering out and black printing for outlining the folds and features on the jacket. The hands of the torso are flesh-coloured, as is his headpiece. The headpiece features black eyes with white pupils, thin black eyebrows, a angered mouth showing his teeth, black beard and a dark skin colour for the outlining of facial features. Thorin also has an alternate expression depicting basically the same thing as the other except he now has a simple black line making a smile. His hair piece is long wavy black hair that's half-tied, which is a new mould that is shared with Fíli, Kíli and the Pirate of Umbar. Thorin also comes with other accessories- a dark grey sword and a small battle axe. In his 2013 minifigure, he wears a simple dark blue tunic, the same as the other but without the coat and belt.

In The Hobbit, Thorin Oakenshield and twelve other dwarves, including his nephews Fíli and Kíli, visited Bilbo Baggins on Gandalf's advice to hire him as a burglar, so that they wouldn't have the bad luck they believed would come from having thirteen members on their quest to reclaim their treasure from Smaug the Magnificent. During the travel to the Lonely Mountain Thorin revealed himself as a capable leader and the most battle worthy of the thirteen dwarves. He was, however, described by Tolkien as haughty. In the book, Thorin was angry at Bifur, Bofur, and Bombur for falling on top of him on Bilbo's doormat. Afterwards, he hung up his light blue cloak with a silver tassel and "said nothing about 'service'". He was also upset about escaping from the Wood-elves' prison in a barrel and was always trying to keep his tassel clean.

Upon the slaying of Smaug, Thorin refused the claim of the people of Laketown to a part of the treasure. The people of Laketown wanting to be re-compensated for the destruction of their city by Smaug as well as being rewarded for slaying Smaug and freeing the Lonely Mountain from his dominion. As well, a part of Smaug's treasure did indeed originate from their former Dale, which was destroyed by Smaug, so it was not rightfully the property of the dwarves. Thorin is here portrayed as being dominated by greed and price, having recently been housed by the people from the Laketown. He refuses to give any part of the treasure away and prefers trying to solve the conflict by force.

From the treasure, Thorin especially wanted the Arkenstone, and was thus furious when Bilbo stole it to use as a bargaining counter with Thranduil, the Elven king, who also laid claim to part the treasure and denounced him as a traitor.

The conflict was averted by an attack of Goblins and Wargs, and the dwarves joined forces with the elves, the Men of Laketown and the Great Eagle's to defeat them in what came to be called the Battle of the Five Armies. During the battle Thorin plays an important part leading an assault that is followed both by dwarves, men and even the elves, showing his strength as a leader.

He was mortally wounded after seeing his nephews Kíli and Fíli die in the battle, but before he died he made his peace with Bilbo by commending the Hobbit's bravery and good character. His last words were, "If more of us valued food and cheer and song above hoarded gold, it would be a merrier world. But, sad or merry, I must leave it now. Farewell." Thorin is thus similar in personality to Boromir, being a good character that is tempted by power, only redeeming himself upon his deathbed. Thorin was buried with honour and the Arkenstone was laid upon his grave.

Richard Armitage with his LEGO counterpart 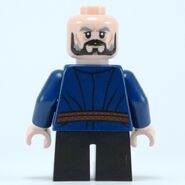 Desolation Of Smaug Back Printing 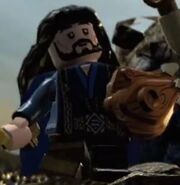 Thorin in LEGO The Hobbit: The Video Game

Thorin's sword, Orcrist, as appears on LEGO The Hobbit: The Video Game

Deutsch Français
Community content is available under CC-BY-SA unless otherwise noted.
... more about "Thorin"
RDF feed
Accessories
Sword
Axe
Orcrist +
Appearances
79002 Attack of the Wargs
79013 Lake-town Chase
79017 The Battle of the Five Armies +
ArticleRating
2 +
Image
'"`UNIQ--tabber-00000001-QINU`"' +
Img1
Thorin_trzeci_dębowa_tarcza.jpg +  and ThorinVideogame.png +
Img2
10902123065_300dfa3fd4_o.jpg +  and Lego_hobbit_thorin.png +
Img3
Thorin_King.JPG +  and Thorin_lk.png +
InfoboxTemplate
Minifigure +
Theme
The Hobbit +
Title
Thorin +
Txt1
An Unexpected Journey +  and An Unexpected Journey +
Txt2
The Desolation of Smaug +  and Young +
Txt3
The Battle of the Five Armies +  and Lake-town +
Variations
An Unexpected Journey, The Desolation of Smaug, The Battle of the Five Armies +
Years
2012-2014 +
Advertisement