Thranduil is a The Hobbit: The Desolation of Smaug minifigure that was released in 2013.

Thranduil has an exclusive headpiece; a combination of his leaved wooden crown and a blonde Elf headpiece. He wears a green coat with gold-silver designs and a brooch. Thranduil comes with grey legs underneath, printed with part of the coat, and a blood-red cape.

Thranduil has a two-faced head, one has a calm and cold face, the other has an expression of shouting or a battle cry. He has notably thick brown eyebrows and lines on his face.

Thranduil, also known as the Elvenking, was the king of the Woodland Realm, a Kingdom of Mirkwood Elves, and the father of Legolas Greenleaf. When Thorin Oakenshield and Company passed through Mirkwood, he had his guards lock them in cells when the Dwarves refused to tell them their intentions. Unfortunately for him, they all escaped with the aid of Bilbo Baggins. Enraged, Thranduil ordered his Elves to go after them and to shut all entrances in and out of his Realm.

Thranduil later fought in the Battle of the Five Armies alongside his fellow Elves, the Men of Lake-town, Thorin's Company and the Dwarves of the Iron Hills against the Orcs-Goblins of the Misty Mountains.

About 60 years later, when the One Ring was reported to have been found, he sends his son, Legolas, to Rivendell to represent his people in the Council. 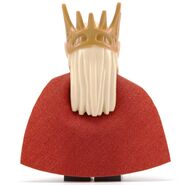 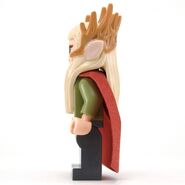 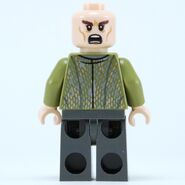 With a blade
Add a photo to this gallery
view · talk · edit Middle-Earth minifigures
Retrieved from "https://brickipedia.fandom.com/wiki/Thranduil?oldid=1977846"
Community content is available under CC-BY-SA unless otherwise noted.