Tia Dalma is a character who appears in LEGO Pirates of the Caribbean: The Video Game. Tia Dalma's token in the video game is unlocked in the level "Singapore"

Tia Dalma is a voodoo priestess that resided in a shack on a jungle river in the Caribbean. She had the ability to see into other people's destinies and owned many unusual and magical objects, such as Jack Sparrow's compass.

In Dead Man's Chest, Jack Sparrow, Will Turner, and the crew of the Black Pearl visit her in order to find out information on Davy Jones, including revealing the location of the Flying Dutchman. She also states that Will was about to have a touch of destiny, even though she had never met him before. Jack Sparrow gives her "undead", Jack the Monkey as payment. After Sparrow's death, the crew return to her shack, where she reveals a resurrected Captain Hector Barbossa, who is reunited with his pet.

In At World's End, she joins the voyage to bring back Sparrow. She reveals information about Davy Jones' Locker and how the sea Goddess, Calypso, was his lover who gave him the duty of ferrying souls to the afterlife, and the one who gave him the Flying Dutchman, only to betray him on their one day as it was in her "nature". It is later revealed, that Tia Dalma is Calypso, bound in human form, by Davy Jones and the Brethren Court by objects known as nine pieces of eight. Barbossa burns the pieces of eight and frees her in hope that she will help the pirates defeat the East India Trading Company, fulfilling his debt to Tia Dalma for resurrecting him. Angered by Jones' betrayal, she abandons them and creates a maelstrom trapping the Black Pearl and Flying Dutchman within. She only tames the ocean upon Davy Jones' death, which is why it is believed he joined her in a further realm. 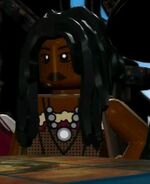 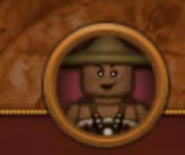 Singapore form
Add a photo to this gallery

Retrieved from "https://brickipedia.fandom.com/wiki/Tia_Dalma?oldid=1921386"
Community content is available under CC-BY-SA unless otherwise noted.