Tim Timebuster was a minifigure who was first released in 1996. He was seen extensively in the Time Cruisers theme until its discontinuation in 1997, but still was in the Time Cruisers comic (1997 -2000) that ran in Europe. After that he appeared in many FreeStyle sets.

As a boy, Tim loved to build things before becoming Dr. Cyber's apprentice.

He has a blue cap, green torso with a "T" emblazoned on it, white arms, and blue legs. His face has freckles, and is one of a few featuring a nose. In Freestyle sets he has several different variations.

With green legs and blue cap

With blue legs and red cap

With green legs and red cap 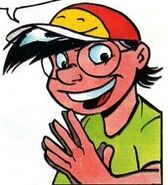