This article is about Tim Drake out of costume. For Tim in costume, see Robin.

Tim Drake is the third Robin.

Tim Drake was at the circus the day the Graysons were murdered.

When Tim was nine years old, he stumbled upon Batman and Robin fighting The Penguin and recognized Robin as Dick Grayson when he saw him perform a complex acrobatic move. He deduced Batman's identity as Dick's adoptive father, Bruce Wayne, and began watching them from afar.

After Jason Todd died, he approached Dick, now Nightwing, and tried to convince him to become Robin again. Nightwing refused, but took him to Batman so that Tim could be Robin. Batman wasn't happy with the idea of training Tim, but Nightwing and Alfred convinced him.

Robin is depicted as having rivalries with villains such as The Penguin and Two-Face (according to Standing Small and LEGO Magazine, respectivly). Robin often works with The Spoiler.

In LEGO Batman 2, Tim can be found on the top of the Harborside Theater, and he can wear Robin's special suits.

Tim Drake is the current Robin. His energy and determination impressed Batman enough for him to take Tim under his mantle and train him as his partner, the Boy Wonder. 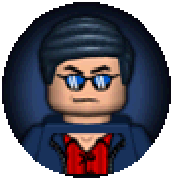