In the animated series, he uses The Joker's hair piece from The LEGO Batman Movie. However, he has Doc Brown's hair piece when pictured in minifigure form in the Lego Ninjago Magazine (Issue 74).

Twitchy Tim went on a balloon tour but his hot air balloon was blown off-course to the Island of the Keepers, where he was scared away by the "storms, monsters," and "doom." He was struck by lightning 12 times during his escape.

He was later among the many citizens of Ninjago to attend Nya's memorial. 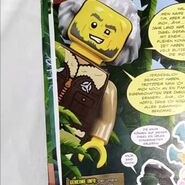 In the Ninjago Magazine