Brickipedia
Register
Don't have an account?
Sign In
Advertisement
in: Class 4 articles, Minifigures introduced in 2014, Star Wars minifigures,
and 3 more

Tion Medon is a Star Wars minifigure, who has appeared in The Yoda Chronicles, in 2014.

Tion Medon was the Port Administrator of Pau City on Utapau. Towards the end of the Clone Wars he was held hostage by General Grievous. When Obi-Wan Kenobi arrived he subtly alerted Kenobi to the situation as to not arouse the suspicion of MagnaGuard spies. 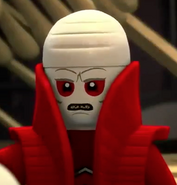