Toa Jovan is a BIONICLE combiner set released in 2006. Its instructions were included in the September 2006 LEGO Magazine.

Around 78,600 years ago, the ending Great Disruption in Metru Nui was imperiling the health of the Great Spirit Mata Nui. To prevent his death, Jovan led his team to the Chamber of Life, located under Mount Valmai in the heart of the Southern Continent. The team successfully battled the various guards and traps in the chamber and retrieved the Mask of Life, which they then brought to Karda Nui to restore health to Mata Nui. After the Ignika's use resulted in the death of a Toa, the remaining members of the team returned it to the Chamber of Life.

After the Toa returned the Ignika, they transformed into Turaga, and Jovan stayed behind to take leadership of the village of Voya Nui and watch over the mask. As a Turaga, Jovan educated the Matoran of Voya Nui about their history through storytelling. During the Great Cataclysm, when the landmass containing Voya Nui broke off the continent and rocketed to the surface of Aqua Magna, outside Mata Nui, Jovan was killed in the upheaval. 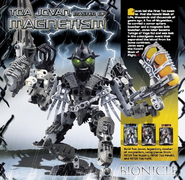 Jovan as featured in a LEGO Club Magazine