He has dark brown hair and his face is scared on one side with a confident smile on the other. He has a black torso, hips, and legs with dark stone grey arms and flesh hands. His torso is printed with a bit of his neck and collar, his blue circle (with a small triangle) arc reactor, the two symmetrical lines down the front sides, grey along the sides, and the muscles' cut on his shirt. The back is printed with the muscles' cut on his back, the symmetrical lines from the front, and large dark grey parts on his shoulder blades which have two white arrows on them. A small line runs from the circles to the bottom of the torso.

His appearance in LEGO Marvel Super Heroes is nearly identical to his physical minifigure, except that his face is the 2012 Avengers face.

His abilities in the game are to hack into computers and use the Iron Man suits.

Main article: Iron Man
Anthony "Tony" Stark was the son of weapons manufacture Howard Stark. Tony believed when he was young his father didn't love him. After his father died, Tony took over his father's company Stark Industries, created many weapons, and became a selfish billionaire playboy. During a weapons demonstration in Afghanistan, he was captured and held hostage in a cave along with Ho Yinsen, who saved his life by removing most of the shrapnel and placing an electromagnet in his chest which Stark upgraded to an arc reactor. There his eyes were opened as he saw where his weapons were going and built his first suit of armor, the Mark 1 and escaped. He announced that Stark Industries would no longer make weapons. In secret, he perfected the suit he escaped with and became Iron Man, announcing it to the world.

He was later dying from a Palladium poisoning caused by his chestpiece, causing him to behave recklessly. This later caused the Mark 2 to end up in the hands of Colonel James "Rhodey" Rhodes, later becoming War Machine/Iron Patriot. Nick Fury and Black Widow gave him the necessary equipment to create the vibranium needed to save his life and he fell in love with his assistant Pepper Potts.

He was a founding member and co-leader of the Avengers, which also included Captain America, Thor, Hawkeye, Black Widow, The Hulk, Quicksilver and Scarlet Witch. Originally assembled to stop Loki and the Chitauri from taking over the Earth, the team later faced Ultron.

Stark later had the shrapnel removed from his chest along with the arc reactor, and destroyed the rest of his Iron Man armours, as a sign of devotion to Pepper.

In the level "Rebooted, Resuited" he and Captain America go to Stark Tower to get his Mark 42 suit due to the villains at Ryker's Island destroying his other suit. They realize they have been locked out by Mandarin and Aldrich Killian, who has overwritten the system. After they break in and Mark 42 is found, they battle the two villains on the top of the building. Killian is defeated, but Mandarin takes over the Hulkbuster armour, and they battle. Mandarin is then defeated. 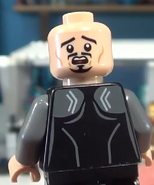 Tony's back printing and alternate face