Tor-An is a Super Heroes minifigure that appears in the DC Universe Super Heroes theme. He was released in 2013 with sets based on Man of Steel. Tor-An also appeared in the Man of Steel DLC pack in LEGO Batman 3: Beyond Gotham.

Tor-An has dark brown short tousled hair and reuses Lex Luthor's head. His torso is black along with his arms, hips and legs while his hands are dark stone grey. The torso is printed with silver embroidery, his emblem: a Kryptonian "T", the suit's muscular cut on his body, and his belt, made of a silver oval and stylized lining. The silver embroidery continues onto his legs.

In the Pre-Crisis, Tor-An was banished to the Phantom Zone for carrying out forbidden experiments that transferred the minds of a Kryptonian family into the bodies of monsters.

In the Post-Crisis, Tor-An is a criminal on General Zod's side.

Tor-An was a member of General Zod's army and helped him in his plan to overthrow the government, but failed and was exiled with Zod to the Phantom Zone.

After Krypton's destruction, Zod and his army were free to leave, and spent years searching for Jor-El's son Kal-El, who had the codex needed to rebuild Krypton.

After learning Kal-El's location on Earth, Tor-An helped Zod with his attack on Earth. However, they were thwarted when Colonel Hardy crashed a plane containing Kal-El's ship, which activated a portal that sent Tor-An and the rest of Zod's army back to the Phantom Zone.

in LEGO Batman 3: Beyond Gotham. 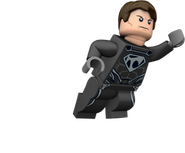