Tormak is a member of the Tiger Tribe, and appeared as a minifigure in Summer of 2014. He later becomes Panthar.

He is a member of the Cat Guides, and a Clan leader of the Tigers, and an ally of the Phoenix Fire Tribe. He adopted Li'ella after saving her from the Hunters. He is the one that allows Laval and Cragger to have a chance to use the Fire CHI when Fluminox opposed, and told him to give them another test to see if they are worthy of infinite use of the Fire CHI. Tormak was also the leader of the Tunnel Cats, Pheonix allies that fought in the Hunters icy caverns. They won the savage war, but every Tunnel Cat besides him died in the fight, while the Hunters were still plentiful in numbers.

In The Snowball Effect, when Laval is away with Li'ella and Flinx, the Sabre Tooth Tigers invade the Lion Temple and freeze all of the lions. Tormak comes in with his FyreClaw and defeats all of the hunters beside Sir Fangar. He then frees the Lions and supplies them with Fire CHI, allowing them to drive out the hunters. However, Tormak could not save the Lion king Lagravis, who is kidnapped by Sir Fangar.

In The King Thing, Tormak uses fire bombs launched with his Tygafyre to close off the hunter's caverns after the Pheonix counters the Hunter's Lion City assault. In A Very Slippery Slope he joins the heroes in attacking Fangar's mountain in order to rescue his daughter, and he even stays in with Laval as the mountain collapses, to find Li'Ella. He is shocked when he learns from Flinx that his daughter would we wedded to Fangar.

In The Artifact, he is sad and desperate due to losing his daughter. Fluminox tries to comfort him and reminds him of how he previously was the only one who understood him. After finding Fangar, he asks Tormak to bring an item called the artifact to them because it contains a map with the locations of the Phoenix Harnesses which are necessary to perform the great illumination. Sir Fangar and blackmails a hesitant Tormak into stealing the artifact in order to release Li'Ella, and then he escapes on his trike. After nearly stopping the deal, he tries to give them the artifact, but it explodes. After using the Phoenix artifact to accidentally defeat the hunters, his fur was blackened by the flames turning him into Panthar. He has a glowing essence around him which burns whatever's around him. Flumiox chases him in the Blazing Bastiodon, where Foltrax questions Tormak's absense.

Afterwards he wandered the Outlands.

In A Spark of Hope, he glows with the energy of the artifact and he chi's up. In his Chi Up, his head has a symbol on it. The energy he unleashes is noticed by Lavertus.

In Wings of Fire, the heroes find him in the Outlands. He continues to burst with the energy of the artifact and explains the map is burned into his essence. He helps the heroes find the 8 fire wing harnesses throughout Chima.

In The Heart of Cavora, he pilots the Phoenix Temple and has his appearance restored by the Great Illumination. 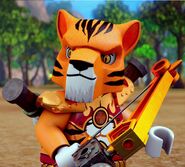 Tormak got stuck in Spinlyn's webs.
Add a photo to this gallery