The Toy Soldier is a minifigure that was released in 2013.[1] He is exclusive to the book LEGO Minifigures: Character Encyclopedia.

The Toy Soldier has blue legs, blue hips, a red torso, red arms, and yellow hands. Gold, white, and gray printing on his torso gives him the appearance of wearing a buttoned uniform and a white belt with a gold buckle around his waist. He also has some minor detailing on his arms and on the side of his legs. Like the Clockwork Robot, he wears a neck bracket on his back, which has a large wind-up key attached on it. He has a yellow-coloured head with black eyes, white pupils, and a smile. He has rosy-pink cheeks, and a grey helmet strap is printed on his face. His shako is similar to those of many of the Imperial Soldiers and Imperial guards, except in red. He carries a brown musket. 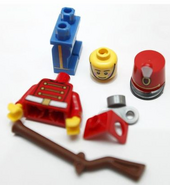 His page in the LEGO Minifigures: Character Encyclopedia next to Mr. Gold