In the films there were several that were used to train Jedi Younglings, most notably Luke Skywalker. They are a playable character in LEGO Star Wars: The Video Game and LEGO Star Wars: The Complete Saga only while the "Extra Toggle" extra is turned on. It is a spherical droid that floats, and its light blaster stuns enemies.

The white and tan droid 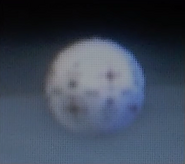