This article is about the Ultra Agents villain. For the car from Drome Racers (Video Game), see Tremor.

Tremor, originally named Louis Lightweight, is a minifigure villian released in the Ultra Agents theme in 2014.

Tremor wears heavy silver armor covered in rivets. It has a hole for his face and multiple areas of textured detail to make the mask look more intimidating. He has a standard yellow face with a red visor and an angry expression. The other side shows Tremor in a scowl. Tremor's body and legs are dark grey with flat silver and red detailing. The feet are printed with flat silver boots. The torso's printing shows armour with more red and flat silver detailing, as do his legs. Tremor wears large flat silver fists over his hands, which have previously been used for the gorilla tribe in Legends of Chima.

Tremor used to be a junkyard worker, but he was sucked into one of AntiMatter's portals in Astoria, turning into the evil Tremor.

Later, he attacked Astoria with a 50 ton armored tank. After a wild chase, he entered the Astor City Museum, and somehow discovered the Ultra Agent's database containing the Ultra Chip. He managed to destroy the security, open the safe, and obtain the chip. However, the Ultra Agents destroyed his tank, and he was then captured. When they asked him how he knew about their safe, he said, "Tremor don't know. Tracks knows. Tracks dead. Poor Tracks." This means that his tank was either programmed by someone (most likely Terabyte or AntiMatter) or had a brain of its own.

After the breakout, Tremor, with his newly-repaired tank, was airlifted by Psyclone. Once out in open air, the villains began choosing civilians. When Psyclone asked how they could tell the difference. Tremor replied that he didn't know, and that maybe he could "shake one like a melon." After the battle with AntiMatter, Tremor could be seen captured alongside Adam Acid, Infearno, Psyclone, and Terabyte. 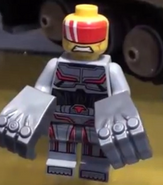 Louis Lightweight before he became evil.

The tank that he drives in 70161 Tremor Track Infiltration 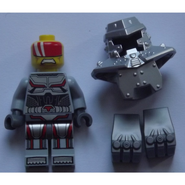 Tremor without his armour on.
Add a photo to this gallery
view · talk · edit Ultra Agents minifigures
Retrieved from "https://brickipedia.fandom.com/wiki/Tremor_(Ultra_Agents)?oldid=1736618"
Community content is available under CC-BY-SA unless otherwise noted.