"Nature is both beautiful and very ticklish."
―Tribal Hunter

The Tribal Hunter, also known as Indian,[1] is a minifigure that released in 2010 as part of 8683 Minifigures Series 1. He has a bow and arrow and wears a brown quiver. The Tribal Hunter is very similar to the Native Americans from Western and comes with the same accessory. The differences are the face and body pattern, and the feather is only printed with a black tip on one side.

The Tribal Hunter has tan coloured legs, torso and arms, with yellow flesh. On his legs is a fabric pattern, which shows the fringe of a buckskin tracking outfit. The same pattern appears on the upper half of the torso. Also on the legs is a tribal blue and white pattern, which is mirrored on the lower half of the torso. There is a necklace with blue beads, white strings and two feathers just under his neck. On his face are four tribal markings, two black and two red. The hip piece has a tribal pattern printed on it, with blue and white triangles and small tan dots. The hair piece also has two pigtails on either side of the head, and a black band above the eyebrows. The hunter has feathers that attach at the back of the head, both white with black tips. The Tribal Hunter has a bow and a quiver accessory. His facial expression is a wide smile showing white teeth, and two normal eyebrows. 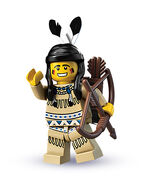 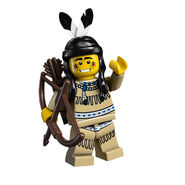 The Tribal Hunter on his base

Feather (2) +
Appearances
8683 Minifigures Series 1 +
ArticleRating
2 +
Image
TH1.jpg +
InfoboxTemplate
Minifigure +
ShopDescription
“Nature is both beautiful and very tick … “Nature is both beautiful and very ticklish.”</br></br>The Tribal Hunter is a skilled, wise and noble tracker who is at one with the wilderness. He lives off the land, his only possessions a hand-made bow and quiver (though some say he also has an MP3 player hidden somewhere, and that he’s secretly a great dancer). There is no better hunter alive, but he does not hunt to eat – instead, he prefers to prove his skill in a most unusual way.</br></br>If an animal is famous for being difficult to sneak up on, you can bet that the Tribal Hunter can be found creeping silently toward it, his bare feet making not a sound on the dry autumn leaves, until he suddenly jumps out to surprise the unsuspecting creature with a friendly poke. Fortunately, he is also a very fast runner, because most of the time he ends up getting chased by something with very big teeth and a very short temper. But that’s all just part of being the best hunter around!just part of being the best hunter around! +  and “If you’ve lost it, I can find it!” … “If you’ve lost it, I can find it!”</br></br>The Tribal Hunter is the best around at finding lost objects. No matter what you’ve misplaced, large or small, he can find it for you. He’s tracked down the Forestman’s cap-feather (it was up a tree), the Zombie’s turkey leg (he left it on the sofa), and even the Circus Clown’s missing pet elephant (it was behind the fridge). It’s made him a pretty popular fellow, but it also means that no one is ever willing to play his favorite game of hide-and-seek with him – after all, he wins every time.</br></br>The Tribal Hunter secretly loves dancing. If he hears about a dance party, he’ll be there…but he’s very shy about it, so he usually wears a disguise so no one will know it’s him. His most precious possession is his MP3 player loaded with dance tunes. No matter how good he may be at finding things, he’s always afraid of losing it!g things, he’s always afraid of losing it! +
Theme
Minifigures
Series 1 +
Title
Tribal Hunter +
Years
2010 +
Advertisement