The Triceratops (Try-sare-a-tops) is an animal dinosaur figure. Various incarnations and versions of the Triceratops have been released since 1997.

The first Triceratops figures appeared in 1997 in the preschool targeted DUPLO line. The figure was part of DUPLO's new Dino and Dino (Dacta) themes. The figure was only one single piece with no movable parts.

A smaller version of the figure was also released as a baby triceratops.

In 2008 a DUPLO triceratops was released with new printing.

In 2018, a revamp of the DUPLO triceratops was released as part of the Jurassic World theme.

The first Triceratops of System was released in 2000 with the Adventurers subtheme Dino Island. The figure had four parts: The horns, the head, the body and the tail. It is built like a crocodile but the head has a clip to hold the horns.

Two colors were available: One with brownish-orange legs and one with light gray legs.

Another Triceratops was released in 2001, as part of the Dinosaurs theme. It was available in the 6722 Styracosaurus set, as an alternative model. This Triceratops was very different to the first one; it had completely new parts, and its color was sand green instead dark grey.

The Triceratops was overhauled again in the Dino theme. This version combines the simplicity of the first version with the size the second version. It consist of a body with 4 detachable legs and a detachable head.

This version of the Triceratops also appears in the LEGO Jurassic World video game and sometimes participates in humorous antics, because of the game's comical nature. The amber piece to unlock it can be found in "Welcome to Jurassic Park," Part 2 and can be obtained by breaking a wall that has gold light coming out of it in back of the very last part of the Triceratops pen.

A DUPLO triceratops released in 1997

A DUPLO triceratops released in 2008

Brown Triceratops from the Dino theme. 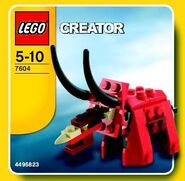 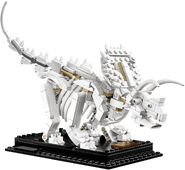 A skeleton version of Triceratops as it appears in the 21320 Dinosaur Fossils set.