The Troll is a Harry Potter minifigure introduced in 2002. He has a club and cloth pieces as coat and pants for accessories. He is a Brick-built Figure that build in unique part that makes it more like a troll than a regular minifigure.

In Harry Potter and the Philosopher's Stone, Professor Quirrell let a troll in as a diversion so he could steal the Philosopher's Stone for Lord Voldemort. However, it found Hermione Granger and attacked her. Harry Potter and Ron Weasley stopped the troll by sticking Harry's wand in its nose, and by using "Wingardium Leviosa" to lift up the monster's club and drop it on its head, knocking it out. At the end of the year, Harry and Hermione found an even bigger troll, however, it was already knocked out by Quirrell so they didn't need to fight it.

The Troll is the first boss in Year 1 in LEGO Harry Potter: Years 1-4. You start off in the girls bathroom. The Troll will have 3 hearts so you have to make him destroy the stalls. Then part of the ceiling falls down. Now use Wingardium Leviosa to lift it up and drop it on the Troll's head to take out a heart. Next he's going to throw purple objects at you and you must cast it back at him with Wingardium Leviosa. When he's down to one heart he'll be dazed so lift up his club then hit him on the head to beat him.

Video Game Differences From the Movie

The Troll in the video game 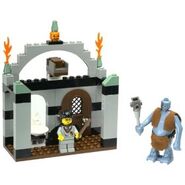 Troll in the LEGO set 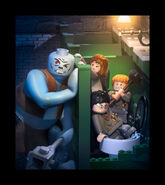 Promotional artwork the troll in the video game
Add a photo to this gallery
view · talk · edit Harry Potter
Retrieved from "https://brickipedia.fandom.com/wiki/Troll_(Harry_Potter)?oldid=1930010"
Community content is available under CC-BY-SA unless otherwise noted.