The Troodon (TRO-uh-don) is a playable dinosaur featured in the LEGO Jurassic World video game.

Troodon is one of the dinosaurs that appear in LEGO Jurassic World. Its physical appearance is based on its appearance in Jurassic Park: The Game. Though they have no role in the game's story, they appear as both enemy dinosaurs and they can be unlocked for Free Play by obtaining its Amber Brick in the Isla Sorna "Breeding Facility" level. It is one of the smaller playable dinosaurs in the game, with only the Compsognathus and the Baby Velociraptor being smaller. They have no special abilities though like most dinosaurs in the game they can be customized with certain features from other dinosaurs to grant them certain abilities. Troodon are also encountered on Isla Sorna and Jurassic World, often in groups. Its depiction in LEGO Jurassic World is less sinister (though they are still implied to be dangerous) and their venomous bite is absent. 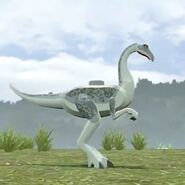