This article is about the Mars Mission minifigure. For other uses, see Trooper (disambiguation).

A Trooper is a Mars Mission astronaut minifigure.

The Trooper wears the standard Mars Mission astronaut white and orange spacesuit, with a white helmet and gold visor. He reuses a common face with stubble, first introduced with a minifigure from 7244 Speedboat.

In LEGO Battles, the Trooper carries a melee weapon.

The Trooper is the Close Combat unit of the Earth army. The Trooper's stats are 2/5 strength, 275 life, and 1/5 speed, and he costs 90 bricks to build. This makes the Trooper a relatively weak unit, but easy to build in large numbers.

In unlockable concept art, a Trooper and a Builder are depicted in "Earth Picture 1" looking up at a star-filled sky. Two Trooper and two Builders also appear in the "Earth Scene 2" concept art, which has also been published as a promotional render for the game. 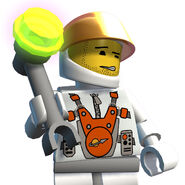 The Trooper in LEGO Battles

Concept art of a Trooper and Builder