Brickipedia
Register
Don't have an account?
Sign In
Advertisement
in: Class 3 articles, Racers, Minifigures introduced in 1996,
and 3 more

Turbo Charger wears an entirely white Octan racing outfit, with a printed torso featuring the Octan logo, "TEAM", and "RACE". His Mini Crash Helmet is printed with red and green stripes, and its Mini Visor 2 is transparent light blue. Alternatively, he may wear a white Mini U.S. Cap. His head is printed with a smiling face and black mustache.

In LEGO Racers, his pants are grey instead of white.

Turbo Charger, who likes to be called "TC" for short, is the fastest circuit racer. He sometimes becomes airbourne when going around bends at 100 miles per hour, so he wears a parachute when racing. TC only eats once per day to save time; he eats an "all-day sandwich" consisting of a pizza with bologna, apple slices, and pancakes, covered with another pizza.[1] He unwraps presents so quickly that he occasionally loses them under the wrapping paper.[4] The Fast Track Finish is his favorite race course, acknowledging that this track has the tools to keep his car running after it frequently ends it up in the pit stop.[2]

At the First Annual LEGO Land And Sea Race O Rama, Turbo Charger races against Eddie Octane and Indy LeMans, but Thresher joins the competition and starts cheating his way to victory. Thresher uses his Spy Shark's harpoons to puncture the tires of Turbo's racecar, forcing Turbo to radio the LEGO Maniac and forfeit the race.[5]

In LEGO Racers, Turbo Charger is one of the default pre-built playable characters, along with Joan of Kart, Roboracer, and Scooter. Likewise, his character parts are unlocked by default for the character builder. 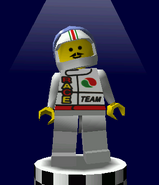 Turbo Charger as he appears in LEGO Racers