The Tusken Raider Minifigure is composed of leg, torso and head pieces. The leg piece is tan and the dark gray colour used prior to the colour change in gray pieces, while the torso piece is predominantly tan with black and brown printing to represent the clothing commonly worn by Tusken Raiders in the films, and the hands are coloured dark gray. Like the rest of the figure, the head piece is mainly tan coloured, but has white, black, dark gray and brown printing to depict the masks worn by the Tuskens.

The 2015 Tusken Raider has been completely redesigned and now features a new molded headpiece to more accurately depict the mask and goggles worn by the Tusken Raiders in the films. The body is all tan and features two brown bandoliers that are printed on the torso. Both the arms and the hands are the same colour as the body and feature no printing. The same colour palette also continues onto the legs which also feature some leg printing to depict the long flowing robes the Tuskens exhibit. The Tusken Raider now carries a gaderffii stick which is comprised of numerous pieces.

Tusken Raiders, also known as Sand People, were a nomadic sentient species native to the planet of Tatooine. Tusken Raiders were often hostile to others who inhabited the planet and were viewed as 'monsters' to many. They believed that water was sacred and given to them exclusively by their gods. In the year 22 BBY, a clan of Tuskens captured Anakin Skywalker's mother Shmi. Anakin went to Tatooine to rescue her from the Tuskens, arriving to see his mother one last time before she succumbed to her injuries. Anakin then proceeded to eliminate the group of Tusken Raiders who captured her. Many years later, his son, Luke Skywalker, encountered a Tusken Raider that attacked him. Obi-Wan Kenobi appeared and used a Jedi mind-trick on the Raiders who were scavenging Luke's Landspeeder. Thinking they were hearing a Krayt dragon, they quickly retreated. 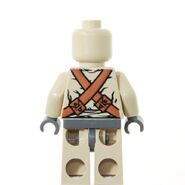