Twitch is a Toy Story 3 minifigure that was released in 2010.

Twitch is a character introduced in the Toy Story 3. He is an insectoid action figure from Sunnyside Daycare, and an evil minion to Lotso. 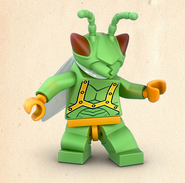