Brickipedia
Register
Don't have an account?
Sign In
Advertisement
in: Class 2 articles, Pages that link to Legopedia (Russian), Adventurers,
and 4 more
English

Tygurah is an Adventurers Orient Expedition Big Figure-looking character introduced in 2003, based on a myth. It was one of the three guardians of the precious stones. In the Tygurah's case, the Sunstone, a yellow gem. He is exclusive to the set 7411 Tygurah's Roar.

Tygurah has orange legs, an orange body, orange arms, and a large orange part set over these to create his body. His torso has some white fur on it, and his head, in the shape of a tiger, has white and black fur, and a black nose. An orange tail is attached to his back.

The Tygurah is a large Indian animal deity that resembles a tiger. He appears in the Orient Expedition subtheme of Adventurers. He was created to guard the Sunstone that is in his temple. He appears in 7411 Tygurah's Roar. His temple has a large chasm in the center that has a bridge over it. In the comics, Dr. Kilroy took the Sunstone and the Tygurah gave chase, but the bridge breaks while he is on it, and Tygurah falls through. Upon seeing this, Dr. Kilroy thinks that the "Tygurah needs to go on a diet". 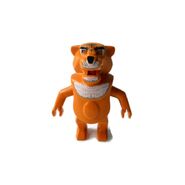