U-3PO was a 3PO unit protocol droid manufactured by Cybot Galactica that had yellow sensors and silver plating. It served the Alliance to Restore the Republic during the Galactic Civil War against the Galactic Empire. In 0 BBY, it was on board the Alderaanian CR90 corvette Tantive IV after the starship fled from the Battle of Scarif carrying the plans to the Death Star battle station.

After reaching the Tatoo system, the corvette was attacked by the Imperial I-class Star Destroyer Devastator. As the corvette shuddered from being struck by fire from the Star Destroyer, U-3PO rushed through the corridors behind the protocol droid C-3PO and the astromech droid R2-D2, but eventually stopped following them and turned off the corridor they were in to enter a different room. The Empire successfully captured the vehicle and defeated its crew soon after. 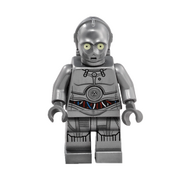 From 2016 Advent calendar
Add a photo to this gallery