All of UFO's minifigures were very alien in nature, and the race featured two wholly robot figures, and many of its spaceships used saucers or half-saucers as elements. It has the smallest proportion of wheeled ground vehicles to ships (two to nine) of any LEGO Space theme before or since. UFO was the first theme to introduce what has since become a staple of LEGO System sets in general: large pieces meant to provide effects (such as curvature) that would be difficult to achieve with traditional LEGO pieces. It also was the first Space theme to feature aliens, though not the first one to make use of robots/androids (Spyrius). In addition to these new elements, UFO contained the only set (6979 Interstellar Starfighter) to use of Fiber-Optic parts (similar parts were used in Exo-Force, but these were different).

The UFO theme has interesting stickers which are placed on a Black 2 by 2 round flat plate. When pressed, the stickers show a symbol similar to that of the UFO theme for about 3 seconds. They can be found on many of the UFO vehicles, including smaller ones carried by large vehicles. Many of the saucer parts, not including the Trans Neon Yellow ones, had the UFO logo on them.

Popular UFO ships include 6915 Warp Wing-Fighter and their largest spaceship, the 6979 Interstellar Starfighter (both released in 1997). The UFO had no primary base, however, when the smaller saucer detached from the main hull of the 6975 Alien Avenger (1997) the bottom half was converted into a command center. Many of the smaller sets only included either the Red or the Blue android, with the aliens existing mostly in larger sets. Their armor was also used by the Insectoids and Ogel, but their helmets have remained unique to UFO. 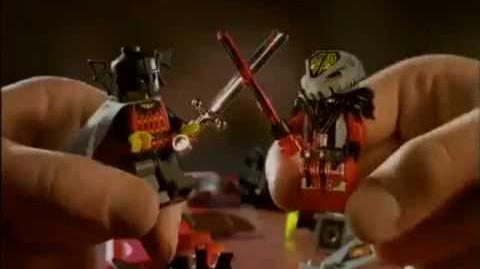 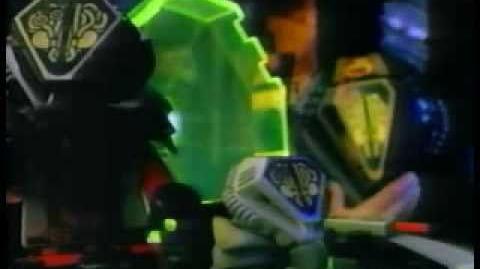