"I had strings but now I'm free! There are no strings on me!"
―Ultron

Ultron is a Marvel Super Heroes minifigure that was released in 2015.

Ultron is a robot created by Hank Pym, and shortly after developing sentience, made his creator forget he had built him. Ultron saw machines as superior to organics, so he decided to destroy humanity, first as leader of the Masters of Evil (who left him after knowing his true plans) and later on his own. He has gone through several bodies, all of which have similar facial features but different body armor, most notably the version of Ultron that reimagined himself as a metal version of the Wasp. A future Ultron (in golden armor) came from the future to conquer the past; however, with the help of Wolverine, Sue Storm, and a younger Hank Pym, this version was ultimately defeated as well.

Ultron was a program recovered from the remnants of the Chitauri invasion of New York by Tony Stark. After much experimentation, he was finally given life, and assigned to protect the world and keep the peace in place of the Avengers with full control of a sub army. However, Ultron soon came to believe that the best way to protect Earth would be to kill off its most dangerous inhabitants, primarily the Avengers of whom his creator was a member of. His first body as a rebel is a broken and Iron Legion Accomplice, but he slowly evolves into a sleeker, more humanoid form with curved, sharp antennae and the ability to fire red beams from his fingertips. Ultron also has Scarlet Witch and Quicksilver at his disposal, manipulating the twin superhumans into believing the Avengers are the true villains as he builds his army of sub-ultron soldiers. 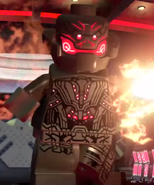