Ulysses Klaue was a man interested on the rare metal Vibranium, only found in the African country Wakanda. during a fight against Black Panther and the Fantastic Four, Klaw fell on one of his own sound-based weapons and became a being of pure sound, able to create sound constructs with sonic "claws" he has instead of hands.

Klaw was a member of Ultron's Masters of Evil, and briefly became their leader after Ultron's first demise. He has also served in the team under other leaders.

Ulysses Klaw is a black-market arms dealer as well as smuggler and gangster who had operated out of South Africa. He is a former acquaintance of Tony Stark from his weapons-dealing days. During an encounter with Ultron, Klaw sold his stockpile of Vibranium to the A.I. before losing his arm in an argument with Ultron. 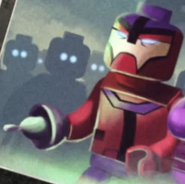 Klaw in his Age of Ultron Variant.

Black Panther variant
Add a photo to this gallery
Retrieved from "https://brickipedia.fandom.com/wiki/Ulysses_Klaw?oldid=1945386"
Community content is available under CC-BY-SA unless otherwise noted.