Brickipedia
Register
Don't have an account?
Sign In
Advertisement
in: Class 4 articles, Video game only minifigures, City Minifigures,
and 2 more

Unnamed Police Officer is one of the characters in the video game LEGO City Undercover. He is seen taking a cup of coffee away from Harry. He is also seen when exiting the police station saying that if he makes 2 more arrests, he'd win a waffle iron! 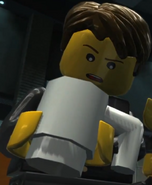