No armour
No armour with helmet
Helmet with armour
Armour and helmet with white hand
See also: Lurtz and Berserker

Uruk-hai are minifigures from The Lord of the Rings released in May 2012.

Uruk-hai were Orcs breed with Goblin-men, and quickly proved their superiority over their kin. They were first created by Saruman in the pits of Isengard, when he defected to the armies of Sauron. Their weapons and armour were all forged in Isengard by Mordor Orcs, and bear the white hand of Saruman. They first saw action when a group of Uruk-hai was sent to pursue the Fellowship towards Amon Hen, where they managed to slay Boromir and capture Merry and Pippin. These Uruk-hai were lead by Lurtz. Later on, an army of 10,000 Uruk-hai launched an attack on the people of Rohan at Helm's Deep. Uruk-hai were proven to be much tougher than any other Orc, and more blood thirsty, as they had the chance to join the light, but those who did were killed. Being direct enemies of the Rohirrim, the Uruk's swords were specially designed with a spike at the end of the blade to latch onto an enemy rider and topple him from his horse. 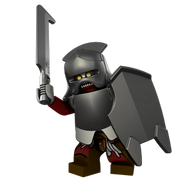 Printing without armour and helmet 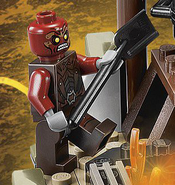 An Uruk with a spade 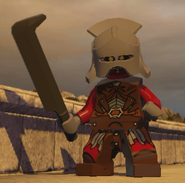 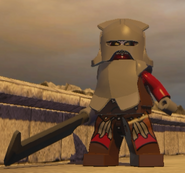 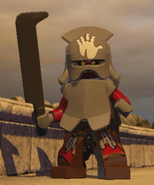