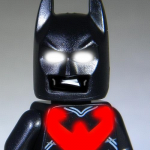 DC Comic Nerd is a hard working editor who plans to make all 2015 Super Heroes articles Featured Articles. After that goal is hopefully accomplished, he plans on still editing but focusing on customs as much as he does editing. (So they'll be even.) Another goal is to become an active admin and be in the top 3 of the wiki. He plans on putting up customs sometime this year. He will be making DC Sets on LEGO Digital Designer mainly based on Geoff Johns'Justice League.

DC Comic Nerd was an editor at the Batman wiki in 2008 in hype of "The Dark Knight" after that, he left in 2010 to pursue other goals in his life. His interest in LEGO was sparked when the 2006 Batman theme came out featuring designs of characters from Batman the Animated Series. He owns all the sets and owns all the DC Comics sets. He also got into comics when the New 52 started. He is a subscribed member to "Batman", "Batman Eternal", "Justice League", "Flash", "Smallville Lantern" and "The Dark Knight". His favorite comic artist is Jim Lee, his favorite writers are Geoff Johns and Scott Snyder. After 2012's "The Dark Knight Rises" he soon became interested in writing scripts. So far he has a "Justice League" script in the works that will probably never be sent out to Warner Brothers because it might be bad. In 2014 he stumbled upon this desolate wiki and decided that with his skills from 2008 - 2010 were a little rusty and needed work. He foolishly ran for admin without even a single edit. Now he is an editor and hopes to become a great member of the wiki.

Retrieved from "https://brickipedia.fandom.com/wiki/User:DC_Comic_Nerd?oldid=1624720"
Community content is available under CC-BY-SA unless otherwise noted.