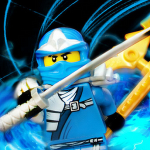 Sup Guys! I'm Jay Walker: The Blue Ninja: Master of Lightning. I live in Ninjago, with my fellow ninja Kai, Cole, Zane, and Lloyd Garmadon. There's also my girlfriend, Nya, and my master, Sensei Wu. My parents are Ed Walker and Edna Walker. We don't really have a place we can call home, because our first dojo was burned to the ground by snakes. Then our second dojo, a giant flying ship known as Destiny's Bounty, was swallowed by the Great Devourer. My personal weapon are the Nunchucks of Lightning. They are one of the four most powerful weapons in the world. Sadly, they were stolen by Lord Garmadon, us ninjas' worst enemy, and ruler of the underworld. He is also Sensei's brother, and Lloyd's father. Did I mention I was the first of the Ninjas to learn Spinjitzu? :P If you have any questions, please let me know!

I always thought of Kai as like a bossy older brother. He isn't very bright sometimes...but hey! Who am I to talk? haha I think he might have his spinjitzu down better than the rest of us, and he doesn't tend to panic as much as I do. All and all I say he is a pretty good team leader.

If I were ever outnumbered by skeletons or snakes and could choose only one ninja to fight along side me, Cole would be the one. He is the strongest and probably most violent. He is also probably the most persistant. However, He says I'm annoying and need to talk less! I don't talk too much! Do I?

Zane is a nin-droid! Yeah i know! He is pretty cool! For the longest time we didn't know he was a robot, and we thought he was just a person. But I guess that explains why he acted so weird. Zane is the nicest and most caring out of all of us ninjas.

She is perfect. No doubt about it! She is secretly Samurai X. But it's a secret! So don't tell anyone! She is Kai's sister. Did I mention she is my girlfriend! SO BACK OFF FAN-BOYS! (Fanboys: awwwwww) Don't make me use my spinjitzu on you!

Sensei is very wise, and a spinjitzu professional. But he is a little strict sometimes. He makes us get up at 7:30 am! Can you believe that? 7:30!!! He is Lord Garmadon's brother and son of the creator of Ninjago.

Lloyd is the son of the evil Lord Garmadon. The little pain in the neck used to be an immature brat who used his snake army to steal candy. But he joined the good side, and became the destined Green Ninja. He is cool now, but he beat my high score on my video game! :O

I know I have lots and lots of fangirls out there! *crickets chirping* But...wow I felt so confident writing this topic...anyway I already have a girl but you can still obsess over me! Me likes it when you fangirls get crazy about me! :D

Want to meet me?

I'm in the brickipedia chatroom every monday from about 8ish to 4ish! I'm on at other times but the other times vary so...yeah! NINJAGO!!!!!!!!!!! *Uses Spinjitzu* Ik ik....then the fangirls go WOOOO YAY WE LOVE YOU JAY! haha I made it rhyme...

Retrieved from "https://brickipedia.fandom.com/wiki/User:Jay-Master_of_Lightning?oldid=1081189"
Community content is available under CC-BY-SA unless otherwise noted.