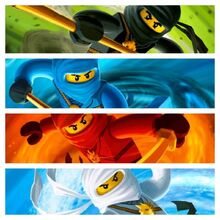 Well, to start, I liked LEGO as a kid, about ages 3-6. Then I stopped for a few years. That was really stupid of me.

Back in 2009, the new Power Miners theme was just out. I was about 10. We were walking through a Walmart or Target, and I saw a little LEGO set on the shelf. I loved it. It had a vehicle with two saws at the front, and one wheel in the back. There was a minifig with blue overalls and a grey shirt on, and was wearing a little blue helmet. There was also a red Rock Monster holding a crystal. I bought the set, and I was set for months with it, adding things to it from my more random collection.

Little did I know that that was the start of a small career, or just a large hobby.

I'm also a fan of Nintendo. My cousin introduced me to The Legend of Zelda just last year, and I've been playing the classic 1980's game ever since! I've grown up playing Mario, but the 1980's game is hard to beat.

Angry Birds has recently gotten big with me as well. I'll upload some of the creations I made based on the series, including the Cardinal Bird and King Pig.

I'm a good student in school, usually passing the year with a 3.9 or 4.0. I really do enjoy every class, despite the modern age of kids who hate school in general.

Finally, I play the piano and about 5 other instruments. I just might add some soundtrack of me playing on my userpage!

So I guess that's all you need to know about me! See ya!

Okay, so there's been this recent hype about Kevin Hinkley announcing that Ninjago will end in 2013 after at least one wave of sets.

He later stated that there will be sets on the shelves in 2013, but has no plan for what is coming after that.

I do think, however, the last wave of sets might include the following item numbers, because of missing ones in the current line -

I believe that one of these will be a vehicle for Lloyd, and 9454 will most likely be a big one, like Lloyd vs. Lord.

There may be some spinners, as well, and here are what I think the item numbers will be -

I'm also thinking Snike will be released in a promo booster pack, or something else like it. Sort of like the Kendo Jay Booster Pack; Spend 75 bucks and get a 5 buck set free.

Here is some stuff I made. I will try and update regularly!

0pxembed/X_hUKpmf3I81
Community content is available under CC-BY-SA unless otherwise noted.