Hi! My name is Powerminerzilla on this site because I like Godzilla and Lego Power Miners. I am trying to collect all the Power Miners sets. Just need the 8190 Claw Catcher and 8191 Lavatraz. I even have 8907 Rock Hacker, 8908 Monster Launcher, and the Power Miners Polybag. I can't wait for more 2010 sets!!!!

Before Power miners, my favorite theme was Bionicle, but mainly the Barraki. And the Piraka. But I also like Aqua Raiders, Atlantis, Indiana Jones, and many other themes. But now I collect Power Miners. I have every Power Miners merchindise, including the monster keychains, the watch, the polybag and the promo sets! Now that's an addiction!

There has been alot of talk about a large wave of new PM sets in summer 2010. Here is a list of them:

I didn't list 3847 Magma Monster because it is a set in the LEGO Games series. 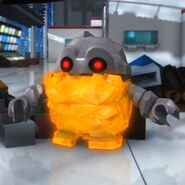 All the new monsters...for now!

Prototype Boxes.
Add a photo to this gallery
Retrieved from "https://brickipedia.fandom.com/wiki/User:Powerminerzilla?oldid=183615"
Community content is available under CC-BY-SA unless otherwise noted.