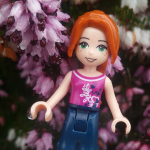 Welcome to my profile! Take a look around & if you have any questions or just want to chat head over to my Talk Page! ~TheMime

~How I Became a Fan of LEGO~

I became a fan of LEGO when I received my first set, 6191 Fire Fighter Building Set, from a relative. At the time I wasn't best pleased, but I eventually got into the idea of LEGO. Then a couple of years later, 2012 or 2013 I think, I acquired 30105 Mailbox, a LEGO Friends polybag, through a newspaper promotion. I fell in love with the bright colours of the polybag and the mini-doll design. For a good year I spent my time constantly re-building that polybag (which resulted in most of the bricks cracking), and combining it with my only other LEGO set. I enjoyed the two sets very much, but what I really wanted was to expand my mini-doll world. So for Christmas 2014 I asked for LEGO Friends, and I received 41038 Jungle Rescue Base and 850967 Jungle Accessory Set. From there my LEGO collection grew, with most of the sets coming from mini-doll themes, though my LEGO interests have recently expanded considerably.

Retrieved from "https://brickipedia.fandom.com/wiki/User:TheMime005?oldid=1938651"
Community content is available under CC-BY-SA unless otherwise noted.