"This is how I will always remember you. Surrounded by winter. Forever young. Forever beautiful. Rest well my love. The monster who took you from me will soon learn that revenge is a dish best served cold."
―Mr. Freeze in Heart of Ice

</gallery>Alright this is my hopefully my final version of Mr. Freeze based on his appearance in Heart of Ice, which is a television episode of Batman: The Animated Series which aired in 1992. It was the insperation for the movie Batman and Robin. Well, anyway, on to my entry for Munchman14's minifigure contest -

I am entering the second attempt, this is only here for reference

Here's a head on view of my minifigure with the Ice Skater doll. The helmet is trans. blue because I don't currently own a transparent one and chances are I won't until well after October

This is the back of the minifigure. In the episode, he only had one tank, but I found difficulty in seperating the two, especially since I only have one of these pieces in blue

Here he is without any accessories

Here he is with his freeze ray. Even though the LEGO one was pretty cool (IMO) this one is surprisingly more accurate to the source material

I'm not completly done, but I didn't decide that (other than the helmet) until after I took the pictures. I based the face off of LEGO's, which I feel was a mistake. I need to lower the eyes, raise the mouth, and add eyebrows.

Here you can see that I have changed the hands to old light gray (which are surprisingly rare), fixed lowered the face, added eyebrows, and gave the freeze ray a metallic cone

Here you can see I've added a strap to the back, nothing too special

Without the stand, to get a look at his feet

Here he is with a beautiful Freeze Girl henchwoman

With the Ice Ballerina doll

This is how I would've liked to make the freeze ray, but I didn't have the right colored gun, these pieces do exist in these colors however

"This is how I will always remember you. Surrounded by winter. Forever young. Forever beautiful. Rest well my love. The monster who took you from me will soon learn that revenge is a dish best served cold."
Add a photo to this gallery

I recently took apart my Power Miners "Magma Mech" and while wondering what I could use the blue drill for, this came to mind: 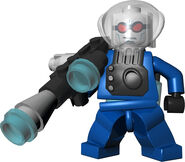 Here's the official minifigure. It's nice as a minifigure, but doesn't really resemble the source material, which seems to be the same as mine.

If you couldn't figure it out from the umpteen other pictures of this minifigure, this is mine. See the episode tribute/summary for source material
Add a photo to this gallery

You may notice the different colors and lack of red eyes, this is because A) I was experimenting quite a bit B) I don't have a color printer, and used a red pencil for the eyes

If you're intersted here's a link to Heart of Ice (sorry about the ads). And if you disliked the Batman and Robin movie, this is very different-[1]

Retrieved from "https://brickipedia.fandom.com/wiki/User_blog:Berrybrick/Entry_for_Munchman14%27s_minifigure_contest-Berrybrick%27s_Mr._Freeze?oldid=1655815"
Community content is available under CC-BY-SA unless otherwise noted.