The text in this page is not licensed under a Creative Commons license. Editing or republishing it requires permission from the copyright holder.

I don't watch The Simpsons very often (maybe once every 2-4 years and never when I have control of the remote) but I don't generally enjoy it. Political satire is good though.

Anyway, fairly recently Marvel/Disney slapped Fox and Sony in the face with the success of their Marvel Cinematic Universe. While Sony is busy kissing up to Disney, what does the Fox say? Fox has chosen a groundbreaking direction for their company. They want the money.

Their plan includes releasing more X-Men movies, more Fantastic Four movies, and then smooshing them together to create their own Marvel Cinematic Universe. I just hope that they team-up with Nickelodeon to include the Michael Bay produced (so you know it will be good) Teenage Mutant Ninja Turtles reboot. Since the heroes in a half-shell (what is a half-shell?) proudly sport "mutant" in their name, they will fit like a glove (on a man who doesn't have claws) in with this universe. Just imagine the story possibilities: Wolverine is a known ninja magnet and Magneto controls magnets. Wolverine and Shredder also both have claws, so maybe Shredder is his long lost half-son who became attracted to Magneto (who was flying over New York looking for spare change). Magneto also picked up Doctor Doom (because he wears a suit of metal) and then they try to kill people, but fail because of the wall of cameos that merge into one being using the power of April O'Neil (portrayed by the fantastic Megan Fox) struggles to say that she believes in them appears and defeats Magneto's feeble attempt to turn Doom and Shredder into weapons by sticking them to his arms.

Remember, you heard it here first.

But back to Fox making monies. They also decided that they needed a presence with the kids (because a green flaming hairy rock ninja with telepathy on a skateboard can only get you so far) and came to LEGO and K'Nex with a blank check if they would create products based on The Simpsons and Family Guy.

I used to like K'Nex, but they only vaguely resemble the toys that I remember nw. Its turned from erector sets to another LEGO clone brand, which is a shame. Anyway, K'Nex got Family Guy and their designs are actually reminiscent of something you might find in the show if you squint hard enough. 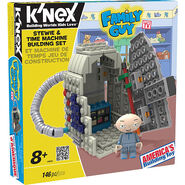 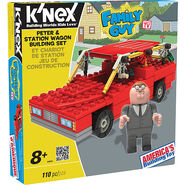 LEGO, if you have not heard by now, has been assigned The Simpsons. I'll try and sound neutral for the moment, but I am currently trying to do research for an article based on toys and the quality of cartoons, and The Simpsons are a relic from an era where they did not have to be designed to sell toys. That is actually a good thing in my book, until you try to make toys based on them. 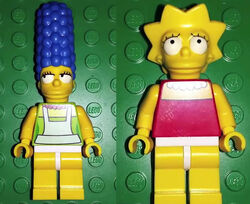 For the record, The Simpsons toys that I have seen have never been very good at all and LEGO's are among the best, but this just isn't working for me. We've gotten some figure leaks and while they do feature good torsos and new arms with short-sleeves, they just end up ruined by the large and abnormal heads, and I am somebody who doesn't mind the SpongeBob, Toy Story, or the human and turtle Teenage Mutant Ninja Turtles minifigures.

So, have you recovered from the Family Guy shock yet? This will look like a Picasso in comparison.

But it's still bland.

When I originally reported about The Simpsons theme back in March last year, I made it clear that I was afraid that any sets released would just end up boring and boxy. I know that the Family Guy stuff was way worse, but this is still just fine, and UCS sets should be more than fine. Here are a couple of examples of sets that occupy a similar piece count: 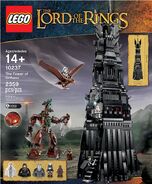 Aside from painting it a different color (medium nougat like the chimney would have been more accurate and looked better) I know that there isn't much else that they could do with this building and I won't even suggest making it smaller, because it looks like there will be a pretty large interior, but this just isn't a good fit for LEGO (pleas of "THINK OF THE CHILDREN" aside). LEGO is blocky, which is why it is much more impressive when the models turn out sleek because it shows ingenuity on the designer's behalf.

In The LEGO Movie which features other interesting contradictions like "big oil is evil" when oil is used to make plastic, the evil Lord Business is attempting to take over the world by sucking creativity out of the minifigures who dare to resist him and what do his henchmen look like? Black cubes, because they are boring and uncreative.

LEGO does need more houses, but with that price tag there are some iconic houses which would work well at this scale, like the house from Pixar's Up, or just City sets designed to resemble Victorian, Tudor, Modern, or anything-but-this stylings.

I've probably talked enough about this and I feel bad wishing that this set and CMF series fail, but all it has going for it is nostalgia (I can't see these selling to kids more than adults, which would not be a good thing) and blind enthusiasm for something which could and should be released in the City theme except, you know, better.

Carlos S has kindly (and I do mean kindly) shared an image his brother took of the back of 71006's box, so now we can see the interior of the set.

It's hard to judge, because unlike the last one it is hard to make everything out, but it still doesn't seem that amazing. Marge has an okay vacuum cleaner, and then there is an okay piano. It seems like the average Friends set $30 and above has more innovation than this though.

Unless better images give a better impression, then this set is just okay in everything except price, which would make it score even lower with me. When you feel like you can design a D2C set just as well, if not better (using different source material, like Grimmauld Place or Carl's House), then it's just a big disappointment in my book.

Retrieved from "https://brickipedia.fandom.com/wiki/User_blog:Berrybrick/The_Ramblings_of_a_Flaky_Yeti_-_Year_One?oldid=1560253"
Community content is available under CC-BY-SA unless otherwise noted.