This will be the main blog for 2014 Comic-Con news. I will be updating it as Comic Con goes on.

What's happening at the LEGO Booth

LEGO Super Heroes: MARVEL The new feature film Marvel’s Guardians of the Galaxy hits theaters August 1st and to honor the event and its newest film-inspired building sets, LEGO Systems will display a custom-built life-sized LEGO version of Groot and Rocket Raccoon. An SDCC exclusive LEGO set, Rocket Raccoon’s Warbird, will be sold and an exclusive minifigure of The Collector from Marvel’s Guardians of the Galaxy will be up for grabs to lucky fans as part of a raffle.

Protect Wullffwarro and his Jedi friend, Kanan Jarrus, with the powerful LEGO® Star Wars Wookiee Gunship. As featured in the Star Wars: Rebels animated TV series, this amazing battle-ready craft has loads of weapons to see off any invading force, like movable front cannons and an elevating top cannon. When the action really heats up, raise the wings into attack mode and unleash the never-before-seen rapid shooters! If you run low on ammo, open the side hatches to access the spare supply, then lower the rear bay door and unload the mobile gun post. Includes 4 minifigures with assorted weapons: Wullffwarro, Kanan Jarrus and 2 Wookiees.

76025 Green Lantern vs. Sinestro will be available to purchase from January 2015 for $19.95 USD. It includes three minifigures, Green Lantern, Sinestro and Space Batman.

This 866-piece set, the first to feature Smaug, comes with five minifigures: Bilbo Baggins, Balin the Dwarf, Dwalin the Dwarf, Ori the Dwarf and Gloin the Dwarf. It will be available November/December this year for a eye-watering $130! 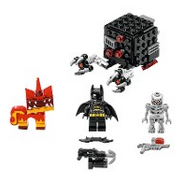 I forgot about this one.
Add a photo to this gallery