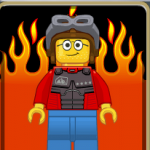 Hello, all of your recent contributions to forums here have been off-topic or pointless. Please ensure that you keep things on-topic. If you need help, there is a separate forum board for that. Thanks, --Berrybrick (Talk) 00:04, August 16, 2013 (UTC)

I need to find some parts to build the plow in LCU in real life, It's the one attached to the tractor Chase uses to plow up the key to get his farmer disguise. I need 6 of the plow's blades to make it and need to know their element ID. They were first seen as elephant ears in 2003's orient expedition theme. I need them in light grey and I need to know their element ID to find them on ebay. Could someone please tell me this by this Friday, a.k.a. the day after Thanksgiving, a.k.a. Black Friday. Thank you. Bio-mech Matthew Riley (talk) 21:26, November 27, 2013 (UTC)

Who's idea was this?

First of all, Who's idea was it to make this wiki a gothic skin, just out of curiosity, second of all, who's the one who took my polar express idea, I really need to thank them for giving me some one to compete with for the honor of having a official Lego Cuusoo set based on the famous locomotive. So, yeah, just out of curiosity as to who are the people behind this, this, confusion of mine. Bye. Bio-mech Matthew Riley (talk) 03:19, January 12, 2014 (UTC)

For those of you who have seen my posts on the Lego.com Message Boards, here is a little random fact of the day that the ever so nice Lego.com Moderators cut from my random information lists.

In response to my previous random information I have found the lyrics for one of my favorite songs to go with the last post.

Well, I can hear the whistle from a mile away. It sounds so good but I must stay away. That train is a beauty makin' everybody stare, But its only destination is the middle of nowhere.

I said cling to the Father and his Holy name, And don't go a-ridin' on that long black train.

As I said before this is one of my favorite songs and it may lead to more random facts in the future.

Retrieved from "https://brickipedia.fandom.com/wiki/User_talk:Bio-mech_Matthew_Riley?oldid=1628879"
Community content is available under CC-BY-SA unless otherwise noted.