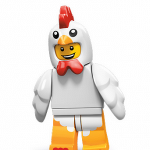 aka Chicken (the 4 piece combo)

Minfigure of the Year Award 2013

Post your entries here, remember: a picture, a name and 50 words on why you should win.

This is Jonah Hex a DC superhero. I think I should win cause I could not make custom pieces like some people can. This is a very creative minifig and a superhero that does not get as mich attention as he should. Also it is a superhero minifig that LEGO has not realeased yet which in my opinion makes it even better. Thanks! Breez77

It's A Cheezy Entry!

Your first and worst entry is here! I spent absolutely no time on this figure, but he comes from an awesome and really old video game titled "Mortal Kombat". This figure is my favorite character from the video game. I have no reason whatsoever why I should win. In conclusion, my entry should win first place. See the logic? :P -LazerzSoH --- Destroy, Destroy, Exterminate!

My entry to your contest 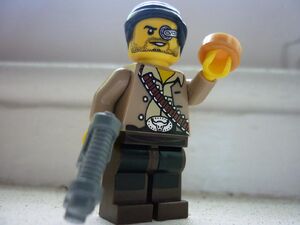 Vladmir Northstone was a former scientist for his country, and served for them in any situation - no matter what the case. In one military, and government operation, known as "Operation Phoenix", a case to use dead people as super, un-dead soliders, Vladmir refused to continue with the operation - and was the only survivor of the case, as the drug used to bring them back, had fallen down one of the other scientist's mouth, doing a different effect - making him a zombie-like character, thus starting an infection, nicknamed "Nixagrein" - which is spread via mouth. Vladmir was on the run - and needed to rebel against them. He started a small army, to take down the zombies, using a secret military gun, and a stolen gold nugget - used to slice open objects, and as a good luck charm.

It's long, but it's a full background for him. A completely original idea. The parts used on him are from the following minifigures: (top to bottom):

I think I should win because of my pieces used, and my resourcefulness to make this figure.

Thanks for reading this, - CzechMate.

Hi! I love your idea of this "Minifigure Contest". Do you mind If I use your idea for a contest of my own? I have a similar concept in mind. Get back to me as soon as you can, but can you do it on my page? Thanks. Oh, by the way...

Maybe you'd like to be the first to vote on my new competition?

Hi BrickSticks. It's great that you're running a contest and making it known, but I think that leaving everyone a message on their talk page about it is going a bit overboard. You have linked to it on previous Monthly MOC Competitions, in main chat, private chat and on other blogs. Many people are aware of the contest now, so I don't think it necessary to continue advertising on talk pages. Thanks, Jeyo Lord VladekTalk The Forge 08:44, February 12, 2013 (UTC)

I chose to make a minifigure of Lord Garmadon-possessed by The Overlord! I spent lots of time designing this minifigure for your contest because I love The Overlord and am disappointed it didn’t become a real figure. I spent a lot of the time planning, so I hope I win! --LSHF (Talk) | Super Villains resembling zombie Hagrid, there is such thing. 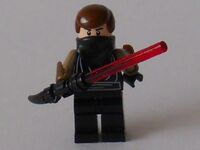 ErkelonJay's entry, or rather, the lack of one

Sorry, but I usually load pictures only once a month, and since I'm waiting for any more requests for minifigures, I won't have anything up until at least the 16th. Sorry. Jay 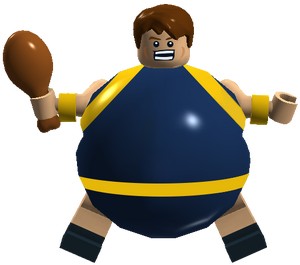 Here's my entry, but it is a little old..

I think the Blob should win this contest because the design is original and has a very distinct and humorous look. To be honest, this figure isn't the best-looking figure I've made, but it took a little ingenuity, even if it wasn't the most time consuming figure I have done in the past. I made sure to make the Blob look as iconic as possible, even to the point of adding his infamous mutton.. or whatever it is. Anyway, I feel like the Blob may be worthy of winning-- but I'll just wait and see. βʊʛ™ Ʈҩƪҡ - Customs 02:51, February 13, 2013 (UTC)

I Think I should win because I kept redoing Sam Because he was western, then a hero, a crime lord, and then he came along. So please consider me. I used my white background and my small collection of Brickarms. Orange was the main color because it isn't always used by others.

Here is a small description; Sam Michaels is a space bounty hunter hired from the crimelord Lag Samus. Sam has had numerous assassination attempts on his partners to flee. While a bit of a coward he finds that war has grown and he joins Nuff's Orange Squadron he is 3rd in command he often has his machine gun and plasma grenade that splatters plasma all over his enemies once he shoots them the plasma can destroy 20 bots.

Retrieved from "https://brickipedia.fandom.com/wiki/User_talk:BrickSticks?oldid=1273239"
Community content is available under CC-BY-SA unless otherwise noted.