The reason I edited your custom page is because the Dr. Rodney Rathbone link was wrong. Maybe you could add a space in between "Dr." and "Rodney".

Why did u bannn me? No reson? Thts not fair! :( Btw, hwo do you make a signatur?

Sure thing. I actually made them by toying with the official templates. Are there any userboxes that are safe to put a comedic spin on?

You left so suddenly

OK Czech here are the details for my sig Color:Green and Red Title:Chatty Hunterkiller of Brickipedia Title Style:Italic text Picture: [[1]]

Minifigure of the Year Award 2013 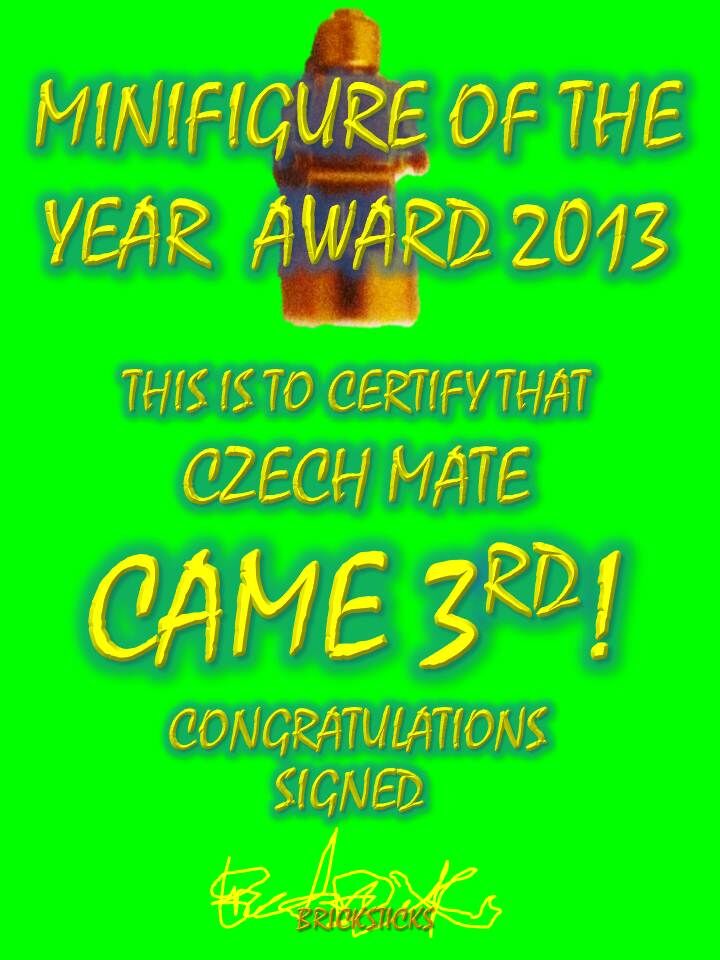 Ok, so now I finally have time to make a news blog! Please, if you can, contact me for the 'boring news' and I'll try my best to add them in the blog! You can contact me via either chat or my talk page. Thanks! :)

Also I have no time to delete the page so you will have to find someone to do it.

And also, I'm trying to make a joke template for April 1st, but I can't get it to work, and was wondering if you could help. I'll send you the information I want in it via Brickimedia Messages. Jay

Hey, me and Ajr are thinking of setting up an (initially text-based) Skype group for Brickipedian regulars, though I'm mostly looking to add admins at the moment. Do you have Skype and want to be added to it? -

Hey Czech. I'm sorry to hear that you're leaving Brickipedia. :( However I was wondering if you'd still like to contribute to Click a Brick? Unfortunately CaB suffered a fatal crash back in May which wiped all user accounts so you would have to recreate your account. Most (if not all) of your brilliant posts and reviews are still intact on the site.

If you don't wish to continue as an author at CaB then that's perfectly fine. I just thought I'd ask. Thanks again for your help and fantastic reviews on CaB! It's greatly appreciated! :) Kind regards,
SKP4472 Talk [[Special:Editcount/SKP4472|Special:Editcount/SKP4472 Edits!]] Welcome to Click a Brick! 21:13, June 21, 2013 (UTC)

You and Bug, accept my party invite. --Knight 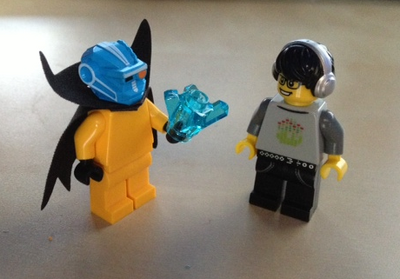 Whether you're an admin or not, you still were rude to Mr.Brix. You spammed his blog with intentionally poor entries to ridicule him, which is unacceptable. Not only does it set a bad example for other users, but it sets a bad image for yourself, an admin, who should be there to support fellow Brickipedians. Brix is only trying to engage in the community, and you are seemingly doing what you can to make him not want to. --ToaMeiko (talk) 02:45, August 10, 2013 (UTC) 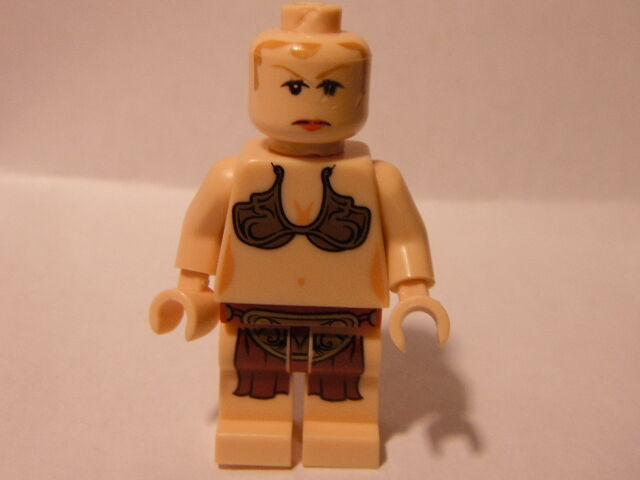 Even if you weren't, then bring up the matter with the person who banned you rather than vandalizing. BrickfilmNut (talk) 00:29, August 29, 2013 (UTC)

I don't know who did.Template:Unsinged

So...It's been a long time since I was active on here and...well it's a downright shame that Cligra left. I mean I would probably do the same if I felt that betrayed. and I commend him for doing it...but...what of Ca$h Cow?

You seem like one of the top dogs, so I just thought you would be the best one to ask about this; just...seems like a waste to abandon the theme. I had a whole new wave of Alternate Time-Line sets ready...

So...any insight on this? your thoughts on the matter? What will become of the Ca$h Cult? just write it off as a loss like Lego Universe...?

FYI, just going to post one little thing on the Ca$h cult page either way. nothing messing up anything hopefully. just like a bit of a tribute.

Dramatically leaving the Brickimedia Skype group, blanking your user page, and who knows what you'll do next. --ToaMeiko (talk) 04:42, September 2, 2013 (UTC)

You said you were good at it so would you mind making me a award to give to others called The Golden Penguin with this photo and it say : Mr.Brix has awarded you a Golden Penguin you get one of these when you have done good things! and at the top have it say Golden Penguin Award.

I had heard of The Raven never heard of Dr.Morphinicus or Golden Eagle you have the rights to take the pages down go ahead.

I should at least take down The Raven.

I actually should take down those pages because I don't want any more people hating me from customs.

Would you go on chat so I can talk to you about this. 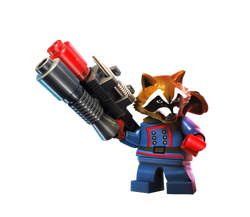 Hey, someone uploaded a lot of non-LEGO videos, a lot of them being duplicates. You might want to delete some or all of them, and warn the uploader.

Sorry to bother you, but Berry might be growing tired of me asking him questions, and you were around. (Maybe I should stop procrastinating and put in that RfA.) --Jay 01:37, November 18, 2013 (UTC)

that wasn't blood, it was the carpet that he had in the room >:( I HATE BLOOD VIOLENCE! why don't you know this? -- King Kahuka | Blacktron Council | Fleet Academy

ok, i'm sorry, but other people are adding this stuff and no one is removing it. —Unsigned comment by King Kahuka (talk • contribs).

I don't like blood and gore, so PLEASE stop talking about it. —Unsigned comment by King Kahuka (talk • contribs).

Re: A Sort Of Warning

But boba said i could upload them back to my page! D:

As soon as Kahuka let's you be in the RP is it okay if I find you and me and you are in a little group?

Your not responding on chat watcha doing?

Try and get your faction fixed with Kahuka and I will upload the pic tommorow.

Should Kyleroering be blocked? I mean, all of his edits are technically vandalism. I reverted practically all of them BrikkyyTalk Extras!

Hey Czecho I was wondering for the SH RP I made I in my latest rp comment found an odd serum in my stolen items and I was wondering if I could have permission to have that be Byzogulater serum and then I pour it out and it goes into a suit of armor and he becomes one of my hired men, I was only asking you because you originally made the villain and he would still be Ramage's enemy.

Come back on chat, please.

Can I be your enemy in my SH thing?

So respond via talkpage Yes or no.

Then could you just do a story from raven of saying no and attacking all my guys.

But you don't have to make the scene just tell me if you want to or if I should just have a part where my men come back saying you said no.

It's happening, I have decided it is time to attempt to breath new life into Ca$h Cow's bloated, mummified, beefy remains. Now I have one question for you. Are you ready to contribute, or is this just a terrible idea?

I just started updating the Ca$h Stuff, not much yet, took all day, only have a tiny bit of stuff to show for it, I'm going to upload the first set later, but here is a highlight of what I've done so far.

Any idea when Brickipedia is going back to blue and white and not the 'Gothic Skin'?

Hey Czech. I was on Brickipedia and noticed your avatar... isn't that the symbol of the Nightingales, from Skyrim? :D Didn't know you played. :P

Hey Czech, Knight and I are making a custom theme and we wanted to make him have his name be Checkmate, so we wanted to ask your permission for the name (even though he is named that because he was named after the gun and Legoman's custom fig) considering it is rather similar to your name, so are you fine with it?

So I might as well give you an update...