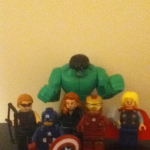 Thanks for the corrections, but next time could you ask before you edit a page with a WIP template on it? Thanks, -Cligra Join the redlink war!

Please stop adding information with no source like, "Hawkeye will most likely have back printing," and, "This set will most likely include an adventure comic book," because there is no source. If you do so again, you will be blocked from editing for at least three days, possibly as long as a week.

Please don't take images and replace them with lesser-quality ones. Thanks, -Cligra Join the redlink war!

Please try and be more critical of sources. Though I do think that guy may have been right, he didn't cite it at all. We can't just go by what people on Eurobricks say they saw. Also, your reason for renaming/creating some of those pages were that was the rumored name. We don't add rumored information to official pages. If this happens again, you will probably receive a warning for adding information which cannot be proven at the time. --Berrybrick (Talk) 18:54, September 19, 2012 (UTC)

I reverted a edit on the DB set page, sorry if that was against your permission- Jedi master sith Spider Talk Ultimate Spider-Man!

If you think that's the case, maybe you should read the WIP Template yourself. It says at the bottom If this template has been on the page for over one week, it may be removed. Yours was overdue and, to be honest, the anonymous user who edited the page did more in one edit than you did the entire week. He was also considerate enough to withhold that edit until your claim on the page had expired. Jeyo Lord VladekTalk The Forge 17:15, October 28, 2012 (UTC)

Hey Djgourhan, Brickipedia is currently thinking of moving to different hosting, and I'd like your opinion on it as someone focussed mainly on content creation and maintenance. This new project would use a skin more similar to Wikipedia's, have less ads and be generally more functional with regards to editing. More information is at Brickipedia:Forum/Move/Why, and Brickipedia:Forum/Move. Thanks, and feel free to ask me if you have any questions. Ajraddatz (Talk) 23:50, February 10, 2013 (UTC)

Being an enormous comic book fan myself, I am interested in giving short concise sections for the Marvel superheroes and villains pages. These sections would give the comic book background of the characters. I believe it would be interesting for some people to compare the origins of the characters in different media. I have been met with a significant amount of opposition to this idea for reasons I cannot comprehend. Please write my back saying what you dislike about my comic book related edits, and why you insist they are irrelevant, or unnecessary.

Thanks for you're time, Spider-Man 45.

PS. Ignoring this, and not talking about this will only result in me continuing to edit the Sandman page.

I'm not even going to check your recent edits on the Marvel pages, but are you using Template:Spoiler like you should be doing? -

Please read my latest post on the talk page for The Extremis Soldier minifigure.

Thanks for your time, Spider Man 45

Thanks for your time. Spider Man 45

Can we talk on chat? --Knight

Hello? It's very important, can you please come to chat? --Knight

Retrieved from "https://brickipedia.fandom.com/wiki/User_talk:Djgourhan?oldid=1579221"
Community content is available under CC-BY-SA unless otherwise noted.